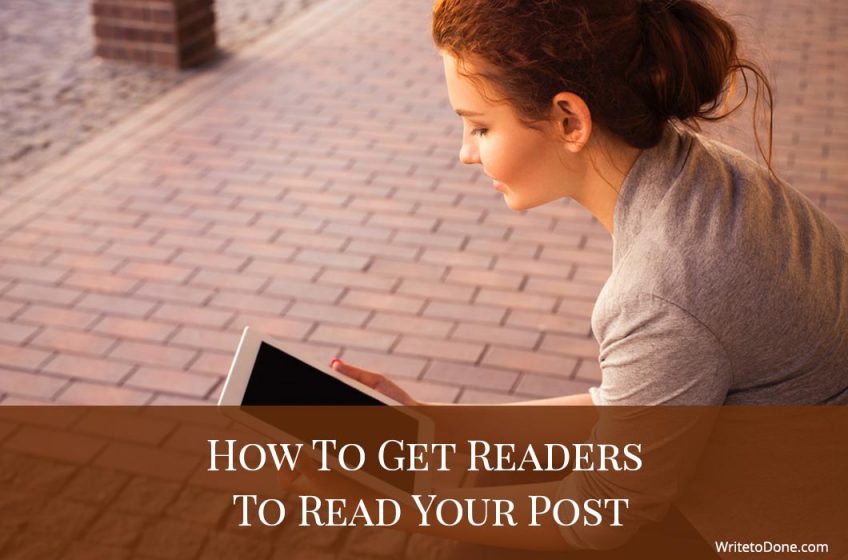 Almost none of you reading this post will read every single word of the post (unless you do it just to spite me).

That’s a fact of online reading that has proven true again and again: people rarely take the time to read an entire post or article. They skim to find the essential information, and then move on.

If you’re a blogger, you should account for that reality, or you are failing to communicate effectively with your audience. And isn’t that what we’re trying to do? Communicate some kind of message to readers, whether that’s useful information, an opinion, news, truth, or beauty?

If you don’t figure out how your readers are reading your blog, you will fail as a blogger.

That means they’re skipping most of the end of your blog posts, just skimming really.

For many of us who read lots of blog posts a day, that’s not really a surprise. We scan most posts for the highlights and move on, and only rarely read some posts with any depth. We just don’t have the time to read every word.

Now, you can argue that’s wrong, or that it’s sad. But it’s reality, and we have to face it.

So the first thing any reader will read is the headline, or “title” of a post. In fact, often the headline is the reason they’ll read a post in the first place. Think about how you find blog posts. Usually it’s in one of several ways:

This means the words in the headline are the most important words you’ll write in your post, because if the headline isn’t good, they won’t read the post at all.

Some thoughts on making the headline worthy of a reader’s interest:

The Lead, or Opening Paragraph(s)

The first paragraph or three in a newspaper article is called the “lead” (also written “lede”) in journalism language. It’s often considered the most important part of a news article, for the same reasons a headline is so important: if the lead isn’t good, the reader will skip the rest of the article.

It’s also important because of how people read online: while you can write a bunch of tripe later in the article (I don’t recommend it), at the beginning of an article people are still paying attention. So make these the best paragraphs you write.

What makes a good lead? The same things that make a good headline, basically: it has to get attention and make the reader want to read more without overselling the article or being too sensationalist. It could summarize the post succinctly, and tell you why you should continue reading.

The Body Text: How to Make Your Post Scannable

The rest of the post — after the headline and lead paragraphs — is doomed if you don’t find a way to communicate the essential points of your post in some easy way. I like to think of this as “making your post scannable” — you want the reader to be able to quickly scan your post for the essential information, just in case they don’t read the whole thing.

Sure, you could write a long, rambling essay about a deeply philosophical topic, but if no one is reading it, what’s the point? Blogging is about communicating, not pontificating.

So here are some of the best ways to make the body of a post scannable:

There are other techniques for making a post scannable, but you get the idea. Experiment to find what works best for you and your readers.

You can ignore this advice and consciously not make a post scannable, but at least do so with the knowledge that much of the post will probably be skipped by your readers, even if it contains the most compelling content in history.