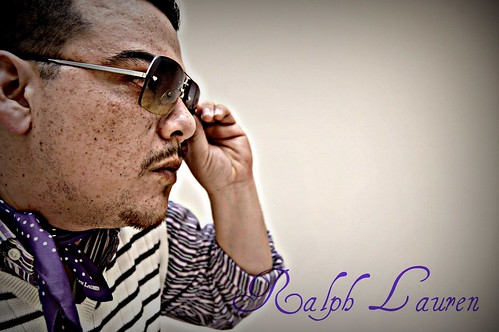 A guest post from Bamboo Forest from Pun Intended

If I were to offer you a beautiful Ralph Lauren shirt and in the same breath an equally beautiful no-name shirt, which of the two would you select?

If you’re anything like me, you’d unhesitatingly go with the Ralph Lauren.

Simple, when we’re offered two items of equal quality, we go with the known one. That’s the way we humans work. If only we bloggers would put this principle into practice more often.

Let’s look at another scenario. Again I have the random urge to give free stuff away and through a healthy dose of serendipity I cross paths with you. I offer you either a beautiful solid color Ralph Lauren shirt or a no-name shirt of the same quality, except this time the no-name shirt has attractive patterns of bamboo adorned on it — which one are you now going to select?

Many (but not all) would justify selecting the no-name brand because of what it uniquely offers.

Let’s face it… most of us bloggers are no-namers. I sure as hell am, and that’s precisely why I strive to offer something unique, something that even them big boys can not.

Do you do the same?

Another avenue to take to gain attention is to blog on topics that aren’t well covered in the blogosphere. If you’re the only one blogging on a particular subject and there is a human demand for it, you’ll do quite well. There’s only one problem: most subjects that people actually enjoy have already become nicely saturated. So unless you think you can make parrot herding popular again, you’re really out of luck.

Ask yourself this one question: “Why do I read blogs?”

If you really think it through you’ll come up with many answers and the most prominent one won’t be: “I want to get the best education possible on a given subject.”

Ha! That’s not why we read blogs!

I can envision a blog providing really good content on a subject while still failing to stimulate me. That blog, though good at giving the information I seek, will never rise to the top.

You gotta entertain while you’re at it; you need to be interesting, otherwise you’re not fulfilling a deep desire blog readers have beyond just learning — regardless of whether they’re cognizant of it.

The following is what Jon Morrow of Copyblogger concluded worked best for his own blog after much trial and error:

” . . . I gradually realized that my role as a blogger isn’t to educate the world. People will buy a textbook if they want to learn. They come to me if they want an interesting little diversion with a few valuable lessons.” [Bold Emphasis Mine]

Never forget this reality. Of course you have to convey something of value to your readers. But if you’re doing it exclusively in an informational way and not being fun and creative about it — don’t expect to get too far when going up against the big boys.

We bloggers are entertainers just as much as we are educators.

Subscribing to Blogs is Time Consuming

Some of you may be thinking, “What the hell do you mean it’s time consuming?! I’ll go right ahead and click on over to the RSS feed here at Write to Done! See, took me only a couple seconds Mr. Smarty Pants!”

The action of subscribing doesn’t take long, but people do actually think critically before adding another blog onto their long list of subscriptions. They understand that subscribing to one more blog means designating more of their limited time to it, time that once used can never be had again.

This is yet another reason why differentiating yourself is so critical. People really do need a reason to subscribe to you.

Look at this hypothetical scenario. You just did a guest post for ProBlogger and you feel like a bucket load of thousand dollar bills because of it! You take a look at your stats and bask in the warm glow of knowing that readers from ProBlogger are coming over to check you out.

There’s only one problem, you also write about blogging and yet you really don’t offer anything new or special. Your angle is the same too.

Do you know what those visitors say to themselves when visiting your blog?

“Nice blog, but I gotta be honest… you offer basically what Darren Rowse does and there’s only so many blog posts one can read in a day. No, I’ll take the name brand thank you very much.”

Here’s what Dosh Dosh has to say and he’s never done a guest post in his entire career:

“I’ve seen some bloggers guest blogging actively while getting on the Digg frontpage and offering ebook incentives for subscription. Some of them used to have more subscribers than me but not any more. I and others outgrew them.”

He goes on to say,

“Incentives and other gimmicks aren’t going to get you very far if you don’t know how to consistently put out content that differentiates your site.” [Emphasis Mine]

You can guest post until you’re blue in the face… but unless you give people a really solid and irresistible reason to subscribe to your blog, you will never reach the prominence of the A-listers.

By the way, I just took a look in the mirror: why does my face appear to have an odd shade of blue?

Your brand encompasses just about everything, from how you write, the look of your blog design, even the kind of pictures you choose for your blog posts. It’s all a part of your brand, and it is this overall presentation that enables visitors to distinguish you from everyone else.

In an interview with John Chow, Eric Hamm of the Blogopolis Blueprint asked:

Paraphrasing, “What are most bloggers doing wrong… they’re working their butts off and not making any money… any one specific thing a lot of bloggers are doing wrong?”

“I don’t think enough bloggers give enough importance to branding. . . . The A-list blogs have a brand. We manage to distinguish ourselves from the rest of the pack. That’s one of the reasons I still have food reviews, it’s just part of my brand. People know that I write about what I eat [in addition to making money] and that distinguishes me from the rest of all the other bloggers who write [only] about making money.”

In a post on Write to Done, Leo Babauta of ZenHabits had this to say about differentiating himself:

“The other blogs grew quickly but soon hit a sort of plateau, because of one of two reasons:

2. They didn’t differentiate themselves from the crowd. They were one of many other blogs, writing about the same things with the same angles.

These are both fatal mistakes if you want as big a readership as possible.” [Emphasis Mine]

How to Actually Stand Out

I was wondering when you were going to ask this question.

The reality is that very few blogs ever really do stand out. Most of us just blend in with our surroundings as if we were all dressed in camouflage standing in the midst of a tropical jungle.

And there’s obviously no simple equation to make us stand out and make a real impression on all the prospective readers (except for maybe a flying whale as your header). If there were — perhaps we’d all have the success we seek.

But knowing that we must differentiate ourselves from the rest of the crowd puts us in a position to actually do so.

Differentiating yourself doesn’t guarantee success. But without it, you’re pretty much guaranteed that you won’t rise too high either.

In the words of John Chow also from the aforementioned interview:

“The number one question you have to ask yourself is how are you different from the blogger next to you. If you can answer that question then your chances of succeeding is probably 90% higher than the person next to you.”

There’s a lot to be said on how to actually differentiate yourself in a winning way. But I’m not going to delve too much into that because this post is primarily on why it’s so imperative to be different, not the how.

The one thing I will say (because I love you my dear readers) and it’s about as clichÈ as it gets: People are like snowflakes, there’s no two alike.

Considering this truth — be sure not to entirely model yourself after other blogs. Use the wisdom and strategy they can teach you, yes. But as the sun is descending behind the mountains — put a little something unique into your production. Something that comes from deep within you.

Clearly we have a lot of competition out there. And it just isn’t enough to be as good at what our competitors excel at. We must also do what they’re not, and do it really well.

Bamboo Forest writes for Pun Intended, a blog that blends humor with inspiration. To ensure you never miss a good hearty laugh or a good dose of inspiration, subscribe here.

A Heads-up for WTD readers
Leo and Mary will run the next A-list Blogging Bootcamp, How to Create a Blog that Rocks from 13-17 February. Everyone had a blast last time! We’ll be emailing some great articles on blogging. Get yourself on the mailing list by clicking on Leo’s report in the sidebar.